Leaf-cutting worker ants might look like they’d be helpless against an enemy soldier ant many times their size. But some of the smaller ants have a secret: Their entire body is coated with a thin but tough layer of mineral armor.

It’s the first time that this type of external, whole-body mineralization has been found in an adult insect, researchers report online November 24 in Nature Communications.

The discovery was serendipitous, says Currie, of the University of Wisconsin–Madison, who has been studying leaf-cutting ants for more than 20 years. His lab had been examining interactions between ants and their external microbes, which are thought to play a pivotal role in the ants’ farming practices (SN: 4/23/20), when the team encountered a white sheen on the exoskeletons of Acromyrmex echinatior worker ants.

That coating needed to come off so the researchers could examine the structure of the exoskeleton in greater detail. So Currie tasked Li, then a postdoctoral student in Currie’s lab who’s now at Ningbo University in China, with removing it. But nothing seemed to work, suggesting the coating wasn’t a wax or other carbon-based compound. Then, while brushing his teeth, Li had an epiphany: mouthwash. It helps remove all sorts of food residue without harming the tongue, and can dissolve mineral deposits on teeth, so Li decided to give the liquid a try.

The mouthwash did the trick, and also gave the team its first clue that the coating was mineral in nature. Further chemical, X-ray and microscopic examinations revealed a thin layer of calcite containing high levels of magnesium.

To see how protective the armor is, the researchers tested the hardness of the ant exoskeleton by poking armored and nonarmored pieces until an indentation formed. Despite being a mere 7 percent of the overall thickness of the exoskeleton, the calcite coating at least doubles the exoskeleton’s hardness, the team found.

The discovery is surprising, says Duncan Murdock, a paleobiologist at the Oxford University Museum of Natural History, though perhaps not wholly unexpected, he adds. That’s because ants are distant cousins of crabs and other crustaceans, which generally have mineralized exoskeletons.

It’s unclear how the armor is made, though Currie thinks bacteria are involved. If so, this could be another way the ants’ microbiome makes a huge difference to the insects’ survival.

The team also tested how well the armor protected the ants in fights with other, bigger ant species. In staged battles between a trio of workers and a solitary soldier ant from a different species, Atta cephalotes, this mineral armor singlehandedly tipped the scale in the workers’ favor, the researchers say. Nearly all the ants that were raised not to produce armor were killed by the soldier ant, while the vast majority of the armored ants survived. 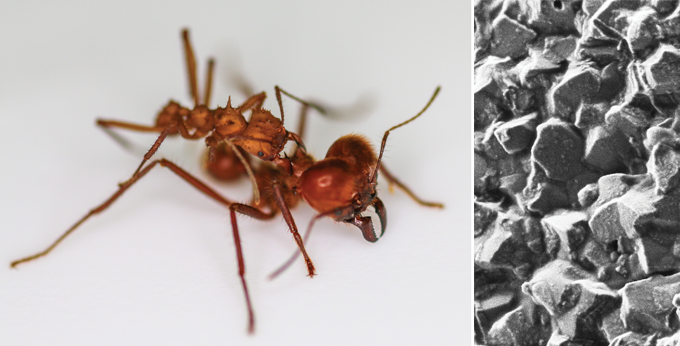 Thanks to a thin layer of calcite (shown in a close-up view at right) on its exoskeleton, the small Acromyrmex echinatior worker ant is able to survive attacks from a much larger Atta cephalotes soldier.From left: Caitlin M. Carlson; H. Li et al/Nature Communications 2020

Robert Schofield, a biophysicist at the University of Oregon in Eugene, isn’t convinced by the battle data, and wonders whether the armorless ants had other differences that may have led to their demise. Still, he’s intrigued, and plans to investigate similar coatings he’s seen on other leaf-cutting ants.

Currie plans to examine other ants as well, in the hopes of determining how widespread the armor phenomenon is. Figuring out how the thin but tough coating forms, he says, could one day prove useful to people in developing protective coatings for all kind of products.