To understand how “bright clouds at night” form, scientists did it themselves

NASA’s Super Soaker mission was basically an extreme DIY project: to better understand how noctilucent or bright clouds form at night, researchers did one from scratch.

One icy early morning in January 2018, investigators fired a rocket carrying water from the bathtub from the Poker Flat Research Range in Chatanika, Alaska. When this rocket was 85 miles from the ground, its water charge exploded and sprayed the upper mesosphere with a plume of steam that froze in a cloud of ice crystals. When these high-flying ice mists are illuminated by sunlight from beyond the horizon after sunset, they are seen in the dark sky like glowing noctilucent clouds (SN: 16/07/19).

The cloud in this experiment was too small to be seen from the ground, but reflections from a terrestrial laser aimed at the "Super Soaker" rocket detected a cloud of ice crystals 18 seconds after the explosion. According to computer simulations of cloud formation, that cloud could form so fast only if the temperature inside the plume of steam was about 25 degrees Celsius colder than the surrounding air, researchers reported in the Journal of Geophysical Research: Space Physics .

Rapid cooling, from an initial temperature of about –45 ° C, suggests that the water vapor released by the rocket not only provided H2O to make ice crystals, but also actively cooled the air to trigger cloud formation.

Water vapor can cool the upper atmosphere because H2O is very good at emitting infrared radiation and the gas high in the atmosphere is scarce enough for this heat to easily escape into space, says study co-author Richard Collins, an atmospheric scientist. of the University of Alaska Fairbanks.

At these altitudes, then, the water vapor itself can easily cool the air enough to create noctilucent clouds. 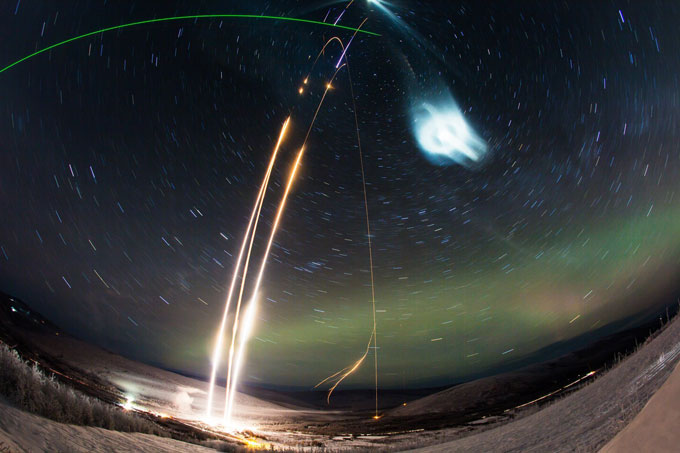 This time lapse photo shows the brilliant trails of three rocket launches from the Poker Flat Research Range in Alaska. A rocket exploded a container of water to create a cloud (not visible, but detected by a green laser beam pointed at the sky). The other two rockets launched bright chemical trackers into the air to track wind movements (creating the blue-white spot at the top right).Zayn Roohi, Poker Flat Research Range, NASA's Wallops flight facility

The Super Soaker experiment “was a very innovative idea,” says Xinzhao Chu, a physicist at the University of Colorado Boulder who did not participate in the work. Noctilucent clouds have become brighter and more frequent in recent decades. But it’s unclear how much of that is due to climate change (which is expected to make the mesosphere colder and wetter) as opposed to more rocket launches pumping extra water vapor into the atmosphere, she says. A better understanding of rocket-generated clouds could help isolate the impact of climate change on the upper atmosphere.